The Yeats Thoor Ballylee Society had a breakthrough this week when Joseph Hassett, an accomplished American lawyer and long-time Yeatsian pledged €31,000 to the tower. Hassett first came to Ireland to attend the International Yeats Summer School in 1963, thanks to fellow Irish Americans in his hometown of Buffalo, New York who funded that scholarship. Since then, he has become an avid Yeats collector, scholar, and an author with Oxford University Press. He is a graduate of Canisius College and Harvard Law School, and holds a Ph.D. from University College Dublin and is a member of the bar in Washington, D.C. and New York. He is a proud Irish American whose great-grandparents emigrated from counties Clare and Cork.

Senator Fidelma Healy Eames, Chairperson of the Thoor Ballylee Society explained “It would be an utter travesty if this iconic building and national treasure was not reopened on time for Yeats’s 150th birthday in June. With Joseph Hassett’s generous donation we are now in a position to re-open the tower and invite the public to a great celebration and cultural event in the Tower and gardens on the 13th of June”.

“Yeats predicted that Thoor would return to a ruin, but to leave Thoor as it is is to leave beauty behind. It’s a place of solace, and we must wake up to the treasures we have.”

Healy Eames is hopeful that the group will raise more funds at a poetry and music event on Poetry Ireland Day (next Thursday, at 8pm) and at a rooftop auction (Sunday, May 31st, at 6pm), at which a local auctioneer, Colm Farrell, will dress up as Yeats and sell items from the top of Thoor Ballylee.

“The building is in a good state,” says Healy Eames. “It has been cleaned, but it needs work done on its electrics and toilets. I have asked Simon Harris, Minister of State with responsibility for the Office of Public Works, if the OPW might work in collaboration with local people in the future management of it.”

There is still much further work to be done. An objective of €1 million has been set to deliver the Yeats cultural centre, which would secure the tower’s permanent re-opening. This would include the development of the Yeats exhibition, a writers in residence program, a cafe, bookshop, and space for exhibitions, lectures and classes. The Yeats cultural centre should provide a huge attraction for the area and boost tourism revenues for the region. Supporters are encouraged to donate what they can or to become a Thoor Ballylee Friend for just €25. Exciting cultural events are planned in the next few weeks and months, many of which involve a rare chance to see inside the tower.

Presenting further pictures from the recent re-opening of Thoor Ballylee in honour of Cuirt, Galway’s literary festival. It was a historic moment as this is the first time in many years the tower, for one day only, has been officially open to visitors.

Colm Farrell, who is conducting a fundraising auction at Thoor Ballylee on 31 May, holds up the key.

As can be seen, it was a beautiful day and the visitors young and old were all enjoying themselves.

After a good deal of work from our wonderful helpers and volunteers the tower is in fine condition.

We need your help! The tower needs a good deal of further work, and we have ongoing plans to create a visitor and education center and so keep the tower permanently open for visitors: read our mission statement.

If you’d like to help, join us, sponsor us, visit the donations page, or come along to some of our forthcoming events! 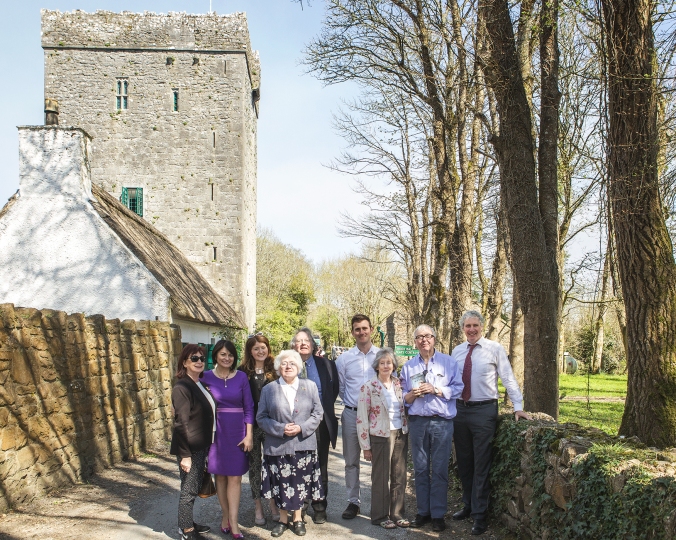 Get updates by following our blog (press the blue W button below or on the righthand menu), visit us on Facebook, and show that you like us. Or get in contact to tell us what you think. Together we can make sure the tower is preserved for future generations.