Welcome to Thoor Ballylee, the Hiberno-Norman tower described by Seamus Heaney as the most important building in Ireland.

Thanks to our volunteers and donors and sponsors and friends, Thoor Ballylee is still open daily all this summer until September.

Watch our video of Thoor Ballylee opening for Yeats’s one hundred and fiftieth birthday on 13th June 2015.

Thoor Ballylee is a fine and well-preserved fourteenth-century tower but its major significance is due to its close association with his fellow Nobel laureate for Literature, the poet W.B.Yeats. It was here the poet spent summers with his family and was inspired to write some of his finest poetry, making the tower his permanent symbol. Due to serious flood damage in the winter of 2009/10 the tower was closed for some years. A local group the Yeats Thoor Ballylee Society has come together and are actively seeking funds to ensure its permanent restoration and reopening as a cultural centre. Because of an ongoing fundraising effort and extensive repair and restoration work, the tower and associated cottages can be viewed year round, and thanks to our volunteers are open for the summer months.

Below is Robert Gregory’s vision of the tower and environs, sketched before his death fighting in Italy in the Great War. Once the tower is fully restored it is hoped that once again it will become a cultural and educational centre for reverie and reflection for visitors from around the world. Come and see for yourself, or to find out how you can help click here. 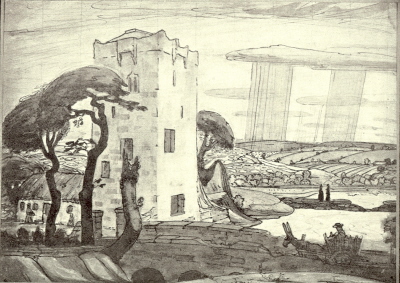