Write back to Yeats!

Thoor Ballylee extends an open invitation to new (or old) poets for a poem in response to Yeats’s lines a hundred years ago (1938) in his poem ‘Under Ben Bulben’ (edited a little, from Stanza V):

Irish poets, learn your trade
Sing the peasantry and then
Hard-riding country gentlemen…
Sing the lords and ladies gay
That were beaten into the clay
Through seven heroic centuries;
Cast your mind on other days
That we in coming days may be
Still the indomitable Irishry

W.B. Yeats, from ‘Under Ben Bulben’ (1938)
So. Are we still the indomitable Irishry??
One poem only per poet — no pseudonyms.
Add name and address/email/phone to  submitted poem.
Poems should  be under three minutes to say and must reach Galway Bay FM  (arts@galwaybayfm.ie) by Friday 29th September.
Up to three poets may be chosen.
The chosen poet or poets  must be available to come and say or read the poem 7.30 on Saturday October 7th in Thoor Ballylee!
There will be a modest award for the poem which, in the opinion of the audience, best responds to Yeats’s poem.

Sarah Clancy, author of The Truth and Other Stories. This is Sarah’s third collection of poetry. In it she excavates the personal and psychological wreckage caused by an unrelenting recession in her native Ireland and further afield – with sacrificing the warmth, wit, or linguistic extremity for which she is known.

Lisa McInerney’s first novel The Glorious Heresies won the 2016 Baileys Women’s Prize for Fiction and the 2016 Desmond Elliott Prize. Her second novel, The Blood Miracles, was published in April 2017 and she is just finishing her third.  She lives in Gort. 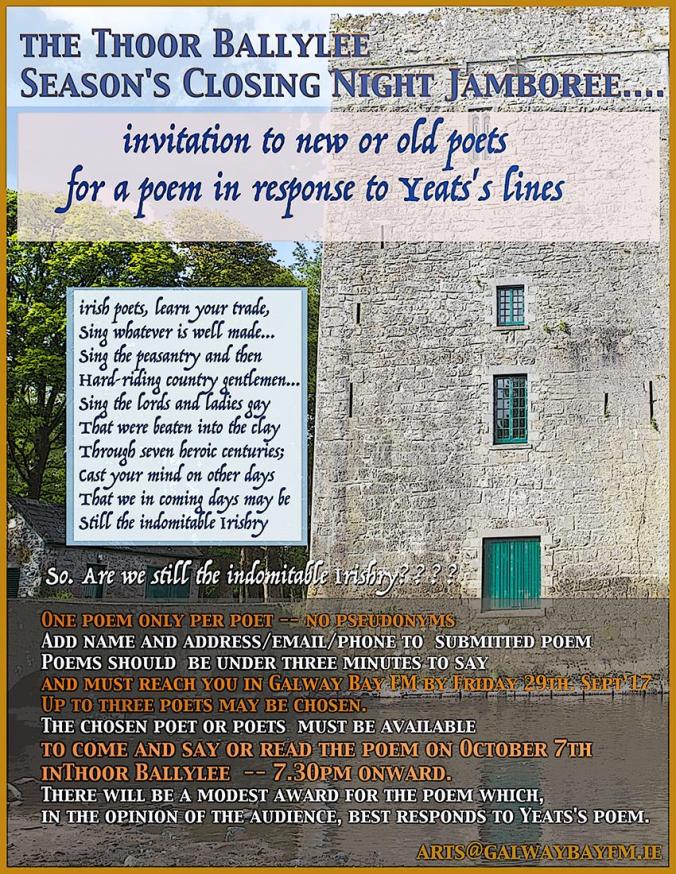